Another demonstration this coming Thursday? 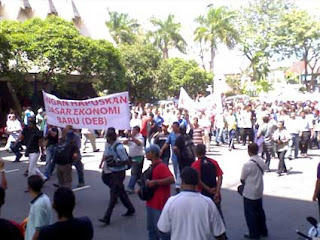 Penangites beware! (No, I am not trying to scare you about imminent bloodshed but more to warn you to stay away to avoid the possible congestion it would cause)

Thursday may be a public holiday (Maulidur Rasul) but this does not mean clear roads with no traffic because it seems the Umno fellas (shall we from now onwards call them Umnobodoh?!?) are intent on organising another demonstration on that day. Or so it was said through widespread circulation of SMSes which the police have claimed to be 'just rumours'.

And there I go thinking Maulidur Rasul or the Nabi Muhammad's birthday is a holy day. I don't know about them but I think they are insulting their very own Prophet by planning political protests on such a holy day.

I mean political protests for personal interest is definitely unholy in every sense of the word. All for what? Just because they are sore losers and could not face the fact that they have lost. They are no longer the blardy state government so swallow the fact and deal with it already!

Okay, so I may be a bit harsh here. Those poor fellas are, after all, fighting for their rice bowl....since NEP only do benefit Umno amongst all the bumiputras in the state. They are losing a substantial amount of income due to this new open tender policy and thus, the demonstrations.

So, it is quite understandable for them to be so riled up upon seeing their whole cake being taken away from right under their noses and being distributed to all and sundry.

Anyway, from all the rumours flying around and SMSes on the upcoming demonstration this Thursday, it seemed the Umnoputras/ bodohs (whichever you want to call them) plan to march from the state mosque to the governor's house to hand over a memorandum to the governor.

It seemed kind of strange that they carried out the demo last week without handing over any memorandum (probably due to inexperience as an Opposition party now...) and now they plan another demo to hand over a demo to the governor and not the state government. Why give it to the governor when their grievances are against the state government's policy?

The Chief Minister Lim Guan Eng has even said that if they do go ahead with the demonstration by misusing the police permit for the Maulidur Rasul parade, then 'the authorities will know what to do'. I don't know about LGE, but methinks the authorities will just do what they did last Friday...stand there, stare, act all important and spring into action when the crowd has dispersed.

Hmm...we shall see if the rumour turned out to be true or not this Thursday.

After all, the has-been, former deputy chief minister, Datuk Abdul Rashid Abdullah did promise to 'hold another bigger demonstration if the state government still refuse to budge from its policy of not using the NEP' and his (or is it Umno?) threat to 'bring down the state government no matter what'. He loudly and clearly announced this last Friday during the demonstration. So based on his 'promise' and 'threats', I wouldn't put it past them idiots to make use of the readily available police permit for the holy parade to turn it into something ugly and unholy.

But if they do chicken out and leave the parade alone, then kudos to them. It could only mean that some of their almost inexistent brain cells are starting to work.

In case you think I am spreading those rumours by posting this entry, my reply is that it is better to be prepared than to be sorry. When it comes to all things politics (especially when it involved sore losers), nothing is predictable nor is it impossible.
Posted by Foong at 3:26 AM