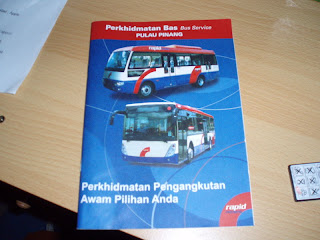 Apparently, they have been receiving threats and were faced with parang-wielding tontos so they decided to just give Komtar a miss instead. The timing of their announcement seemed much too timely that it bordered on suspicious motives behind such a decision.

Don't forget, Rapid Penang is a federal funded project and so it is under the BN federal government. Are they just listening to instructions from higher up or is this really genuine?

What I don't understand is the deal with the bus lanes. As I remembered, each bus have their own lanes in the days of many bus companies working together to provide public transportation to all. Even at that time, the Transit Link, which used to be under the council, though slow and untimely, was running smoothly with the other companies, namely, Sri Negara, KGN Hin, Lim Seng Seng and Yellow Bus.

Nobody heard of lane hogging, parang-wielding tontos and threatening bus drivers. Perhaps times have changed. Now, bus operators especially government owned ones could hold the state government to ransom by refusing to stop at the Komtar bus terminals where all commuters have always waited for buses while some bus operators can go around acting like big samsengs shouting threats at competition, and hogging lanes like there is no law here.

Many passengers have been left on the lurch, most of them who wants to take the Rapid Penang buses will have to walk to the Ong Kongsi bus stop along Penang Road with no shelter or to the Gama bus stop. Both are open small bus stops which leave waiting passengers open to the elements, come rain or shine.

Rapid Penang still refused to go to Komtar 'for fear of their drivers' and passengers' safety' because of the parang incident. (Incidentally, they have already identified the parang wielder and the police duly informed)

And what did the illustrious Chow Kon Yeow, the new exco who inherited this headache from Dr Teng, do? Well, he pulled a Dr Teng. He met with both parties. He was bullied by both parties and he finally pushed it all off on the Commercial Vehicle Licensing Board. That is a typical, classic Dr Teng!

Then he went on to say that he had been pushing for the pajak system to be done away with when he was just an MP (and the Opposition in the last few terms) so the system is the root of all evil. And that is it. He blamed it on the pajak system but did not offer any valid solution except to try to get CVLB to do away with it. The pajak system, by the way, is where bus drivers lease the buses from the companies and whatever they earn is their salary. Thus the dirty tactics to get more passengers.

Now is that a concrete firm hand to ensure those idiots do what they are supposed to do? I am not too sure. Methinks, CKY is just as soft as his predecessor and that is not good. It does not bode well at all!

One could only hope that he is the way he is now because he is still new to the job. I hope that he will gather his wits together and use a firmer hand in future. After all, he and his fellow DAP & PKR colleagues only have about five years, and that is not a very long time, to prove themselves capable of running the state government.
Posted by Foong at 12:16 AM