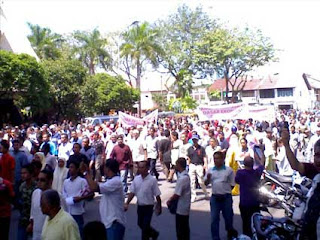 Picture of the Umno demonstration in front of Komtar borrowed from anilnetto.com

I truly don't understand it.

When the people took to the streets in peaceful demonstrations to hand over a memorandum (namely Bersih and Hindraf) they get tear gas and water cannons. Some were even imprisoned.

Look at last Friday. The Umno idiots and has-beens took to the streets just because they could not accept being losers were left to do it in peace while shops around Komtar quickly close shops to avoid any trouble. The FRU? Sure, they were there but merely as decoration. They stood there in full attire just staring at the crowds. Tear gas and water cannons? They must have misplaced it somewhere.

Just for the sake of 'show' a police helicopter was spotted circling above for the maximum of 10 minutes before it too was..'misplaced'. Meanwhile, the Umno fellas think they own the blardy streets marching along the roads, causing massive jams in the city centre.

And of all the stupidest things, they were demanding the federal government to withdraw all mega projects in Penang. If that is not vengeance, I do not know what is. My questions to the Umno fellas are simply: what or who gave them the blardy right to ask for those projects to be scrapped? Is it their money?

Then there is the NEP issue and the so-called Malay rights. Since when is NEP for the Malays? I had always thought it was an Umno thing, you know, abuse it to the max so that only the Umno fellas get the most out of it. It may have been formulated to help the bumis back in 1971 but now, it is more of a policy to give everything to the Umnos than anyone else.