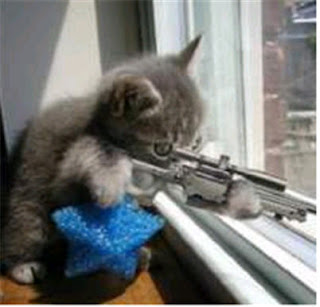 "Don't just shoot for the sake of shooting..."

Utusan Malaysia obviously have a hidden agenda of their own. First they 'accidentally' misquoted the new CM by planting choice racial sentiments in his mouth early last week. However, after he told them off both officially (to the boss)and unofficially (to the reporters), they again misquoted him on Saturday. And again, it is the same sensitive racial sentiments issue.
Was it intentional or another 'accidental' error? Hmm...I seriously doubt it was another 'editing' error. It is a sad state of affairs indeed that journalism integrity no longer exists in Malaysia. Sure, most of the media are gagged thanks to the fed government's stupid Acts but need they also lose their integrity to purposely make other parties, which are not the BN, look bad for the political gains of BN?

I reproduce here a blog entry by the blogger MP about the whole thing:
Jeff Ooi's take about the media misquotes last week-

All leaders in states not controlled by Umno dominance must be careful.

In the aftermath of the Abdullah debacle in GE2008, Utusan Malaysia and Bernama became the two media organisations that stoked political hatred, pitting Malays against non-Malays.

Both the media groups framed Lim Guan Eng for a mention of May 13, which the new Penang CM didn't say. I knew as I stood behind him during the press interview. And the CM's press secretary confirmed the same.

We queried Khalid Mohd, the Group Editor-in-Chief of Utusan. He passed the buck to Bernama, saying that his paper had used the national news agency's dispatch, though his reporters were present during Guan Eng's interview.

We took Khalid at face value and queried Yong Soo Heong, the Editor-in-Chief of Bernama. He faxed us this letter yesterday, which I reproduce verbatim:

On behalf of my colleagues in BERNAMA, I would like to congratulate your team and you for the recent victory in Penang.

I would also like to take this opportunity to apologise for the sloppy editing in the news story of March 12, 2008, which we mistakenly quoted you as commenting on the May 13 incident as well. The inclusion of the fact was intended to give background on the establishment of the NEP in 1971. Nevertheless, upon a thorough review, the inclusion of that fact along with your quote may have been inappropriate.

As we move forward, I would like to ensure you of BERNAMA's co-operation for your newly-formed government and shall always endeavour to help you promote the well-being of Penang and its people.

The Utusan-Bernama ruckus started when Guan Eng announced all government procurements in Penang will be through open tender -- something that the NEP did not address and went on to create cronies and entrench corruption in the system.

I hope the next time Umno leaders took to the streets to stoke people's sentiments along racial lines, you know who is to blame.

Well, all I can say is that I hope those who read mainstream newspapers would not be so easily deceived.

Readers, do remember one main important point: newspapers affiliated to political parties DO NOT report the truth but the skewed truth in accordance to their real bosses' agenda.